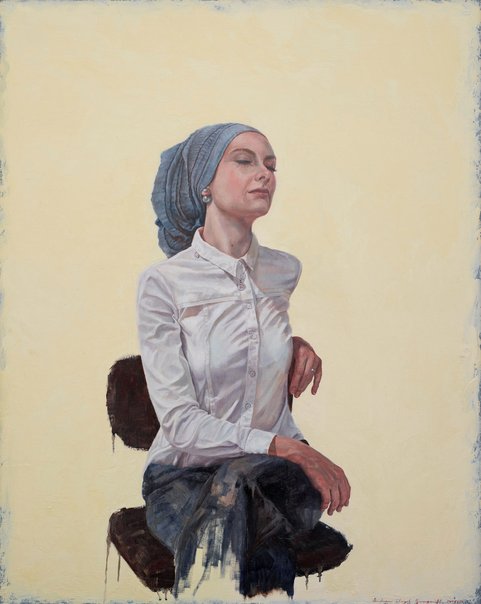 ‘I chanced upon a Harper’s Bazaar article about Dr Carland and was impressed by her work and resolve,’ says Andrew Lloyd Greensmith. ‘Too often we portray other cultures in their extremist forms yet only see our own in idealistic terms. Susan’s work gives Muslim women a voice in an age when many speak over and about them but never with them.’

‘Drapery of all sorts, particularly on the female head, has appealed to painters like Vermeer, Sargent and Sorolla throughout time. Susan’s hijab, so much part of her identity, is integral to the piece and was a new challenge to paint,’ says Greensmith.

‘Working at the coalface of the dichotomy between Islam and the West must be frustrating yet Susan is unperturbed, forging ahead to progress Muslim women’s rights despite criticism from within and outside Islam. I have placed her in a generous space to convey this lonely isolation yet in a reflective pose to capture her serenity.’

Born in Auckland, New Zealand, Greensmith is a plastic surgeon and self-taught artist who lives in Melbourne. It is his second time as an Archibald finalist.