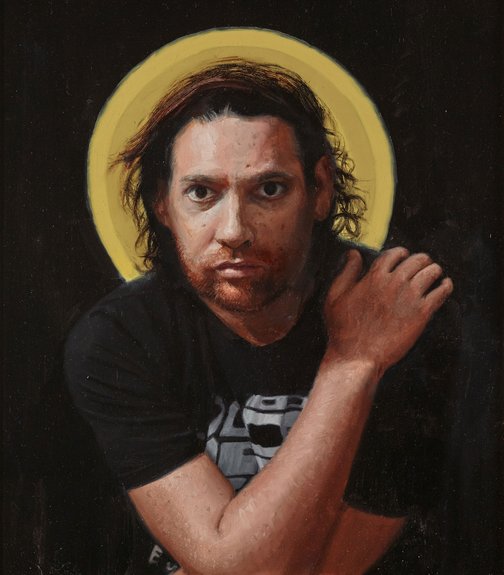 Ben Smith’s subject is artist Tony Albert, whose work engages with Aboriginal and Australian history. Albert is best known for his work re-appropriating kitsch depictions of Aboriginal people, which he calls ‘Aboriginalia’. In 2012, he created a series called We can be heroes in response to the police shooting of two Indigenous teenagers.

‘The painting shows Tony leaning towards the viewer with a quiet strength and defiance. However, there is also a sadness and warmth in his eyes,’ says Smith. ‘At first glance, the yellow circle behind his head looks like a halo. This refers to his very difficult and important work examining our past and its impact on today. However, it is also a reference to the sun on the Australian Indigenous flag, and a subtle target. The latter relates to Tony’s We can be heroes series. His work drew from the subsequent protest rally, where he noticed that a group of boys had taken off their shirts to reveal targets drawn on their bodies. Tony continues to promote positivity and understanding despite Indigenous Australians frequently being unfairly targeted in our society.’

Born in Canberra in 1977, Smith works between studios in Sydney and Murwillumbah, New South Wales. Twice a finalist in the Sulman, this is his first time in the Archibald Prize.