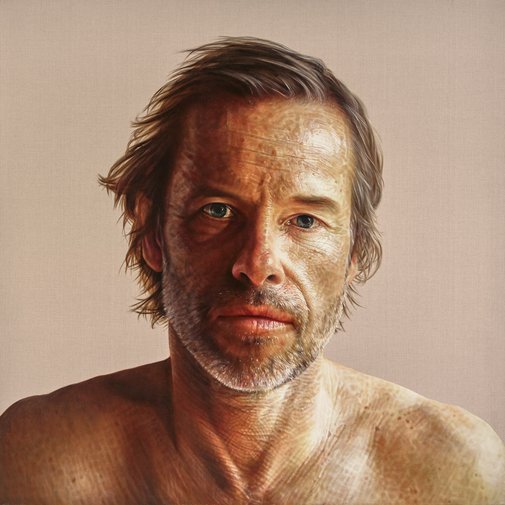 Anne Middleton has long been fascinated by Guy Pearce’s gaze. ‘I see profound depth of emotion and some sadness in Guy’s eyes, however, his gaze is direct and bold. It was this curious melding of uncompromising determination and a certain boyish sweetness that led me to ask if I could paint his portrait,’ she says.

‘In person, Guy is disarmingly approachable. Born in the same year (1967), and with a shared love of living in Melbourne, we chatted about all manner of things. My portrait of Guy was inspired by early photographic portraits of Indigenous people using tintype photography, the otherworldly translucency of skin it imparts and the compelling directness of an unselfconscious gaze,’ says Middleton.

‘I painted Guy in the natural light of my studio. One side of his face is in deep shadow. Obscure and mysterious, it speaks of hidden, difficult times. The other side is brilliantly lit. It is an uncompromising light, honest and unflinching. This extreme tonality enabled me to explore Guy’s chameleon nature and his personal awareness of the light and dark within that makes him both an extraordinary actor and a kind, funny and unassuming bloke.’

Middleton is the daughter of artist Max Middleton, who himself had works in the Archibald, Wynne and Sulman Prize exhibitions multiple times between 1954 and 1962. In this, her first appearance in the Archibald Prize, she has won the ANZ People’s Choice award.