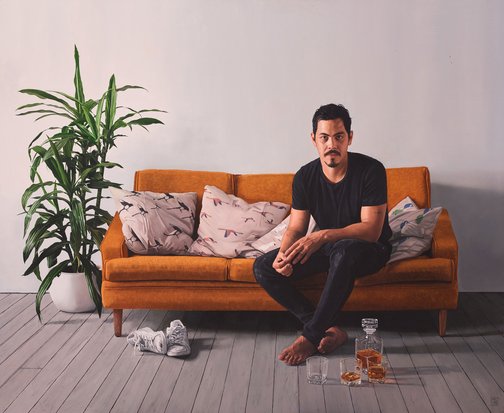 Jonathan Dalton’s subject is multi-disciplinary artist Abdul Abdullah, who is himself a four-time Archibald finalist and judge of the Young Archie competition for the last two years.

‘I’m a huge admirer of his work, which speaks so eloquently to a sense of identity and the notion of otherness, a critically important message in a time of increasingly belligerent tribalism,’ says Dalton.

‘Abdul has an infectious energy and easy affability that makes it impossible not to like him. But he has these moments of near laser-like focus and intensity when something catches his attention. I wanted to capture that penetrating intensity in his stare but juxtapose it against a delicate and pensive hand gesture.

‘Abdul came to my studio for a sitting where I had carefully prepared a staged set. After making an initial sketch or two, I took approximately 250 photographs. But despite the work appearing somewhat photorealistic, it has a false perspective that would be near impossible to reproduce in a conventional photograph. This was done to draw the eye to Abdul and artificially heighten his engagement with the viewer,’ says Dalton.

Born in Dublin, Ireland in 1977, Dalton migrated to Australia just over five years ago from Spain and now lives and works in Sydney. He was also a finalist in last year’s Archibald Prize.