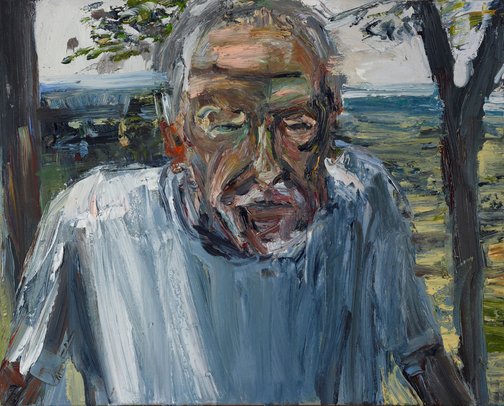 Euan Macleod’s subject is artist Guy Warren, who is known for his abstracted paintings combining the human form and landscape. Warren won the Archibald Prize in 1985 with a portrait of artist Bert Flugelman. Macleod is likewise an Archibald winner, taking home the prize in 1999 for a self-portrait. He has also been hung five times in the Wynne Prize and four times in the Sulman, which he won in 2001.

‘I’ve admired Guy Warren’s work for many years. I feel we share an affinity in attempting to represent a human presence in the landscape,’ says Macleod. ‘I’ve been on a few artists’ trips with Guy and feel that despite his age (97) there is no sense of him slowing down or resting on his laurels. His work totally consumes him to the point of frustration. I feel doubt is an important ingredient in growing as an artist and in producing vital, focused work, as Guy does.’

Macleod painted the portrait in Jamberoo, on the south coast of New South Wales, where Warren has a shack in the rainforest. ‘He had invited a group of artists to his place in the bush, to share a place he is passionate about,’ says Macleod. ‘This was the last of four portraits and I feel this one, done very quickly, has more of Guy’s life force.’