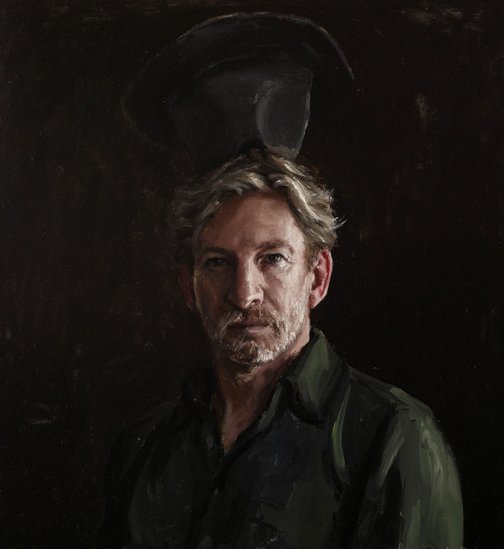 Actor David Wenham’s numerous credits include The lord of the rings film trilogy and television series such as The code, Top of the lake and SeaChange. He was also unforgettable in The boys both on stage and screen.

‘I have been a fan of David since I was a kid,’ says Jordan Richardson, who was born in Sydney in 1993, trained at the National Art School and lives on the Central Coast of New South Wales.

‘When I got the chance to paint him I was excited but a bit nervous. However, he put me at ease instantly. We grabbed a coffee and just talked. The next time we met I drew him while we chatted. I then ran some ideas past him and eventually we were both standing in front of a mirror pulling faces with absurd poses and props until he pulled out his hat. After that, I felt we were onto something,’ says Richardson.

‘Throughout the process, David’s openness has astounded me. Someone in his position must often need to wear a mask but I’m grateful for his candour and time, which has allowed me to capture at least a snippet of the man.’

Richardson was also a finalist in last year’s Archibald Prize.