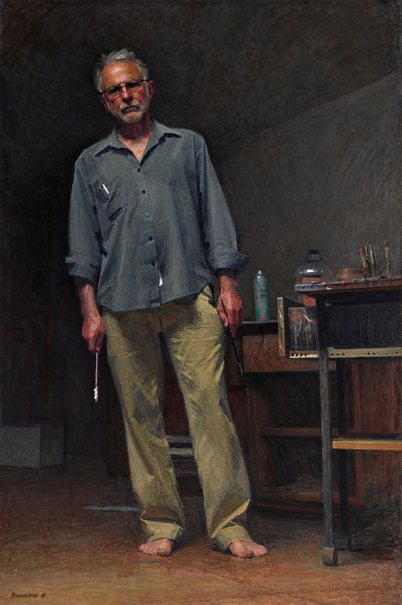 Robert Hannaford is a serial Archibald finalist; this is the 26th time he has been represented in the prize. He has won the People’s Choice on three occasions.

Several of his previous Archibald paintings have been self-portraits, including one in 2007 painted while he was recovering from throat cancer in which he depicted himself at the end of chemotherapy and radiotherapy, naked with a feeding tube. In 2015, he painted a kind of companion piece showing the stomach scar where the tube had gone.

It was the light that fascinated him in that 2015 self-portrait – as was also the case here. ‘I painted a self-portrait because I am a patient, reliable model,’ quips Hannaford. ‘I was fascinated with the light graduating into darkness. I also tried to paint the mood in the studio. It took me four months. The last month I painted with my left hand due to a shoulder operation which meant I couldn’t use my right arm.’

Born in 1944, Hannaford lives and works with his wife, artist Alison Mitchell, in a restored farmhouse near Riverton, South Australia. He has been a finalist in the Wynne and Sulman Prizes and won the Doug Moran National Portrait Prize in 1990.