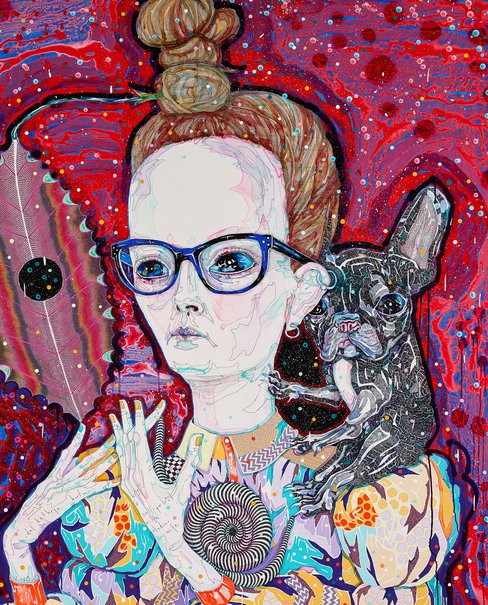 Del Kathryn Barton has won the Archibald Prize twice – in 2008 with a self-portrait with her two children, and in 2013 with a portrait of Hugo Weaving. This is her fifth time as a finalist.

Here, her ‘studio wife’ is her three-year-old French bulldog Cherry-Bomb.

‘About half-way through my beloved mother’s two-year battle with terminal cancer I felt an urgent need to embark on a major self-portrait for the first time in nine years. The heart of my universe was changing irrevocably,’ says the Sydney-based artist.

‘With my fierce little Cherry-Bomb-studio-wife keeping a look-out on my shoulder, I was taken aback when finishing the work by how child-like I look. Little-Del-the-daughter is very present.

‘I completed the painting four months after Mum’s death. My hands open in a state of uncertainty and loss. A single finger touches a giant leaf. This leaf, vibrating with the life energy of the universe, is my departed mother,’ says Barton.

‘Cherry-Bomb is witness to and defender of my creative life. I remain forever grateful for her play-like-it’s-the-end-of-the-world presence in my life, especially at a time of indescribable loss. Her deep eye contact is one of the most healing elements in my journey with grief.’