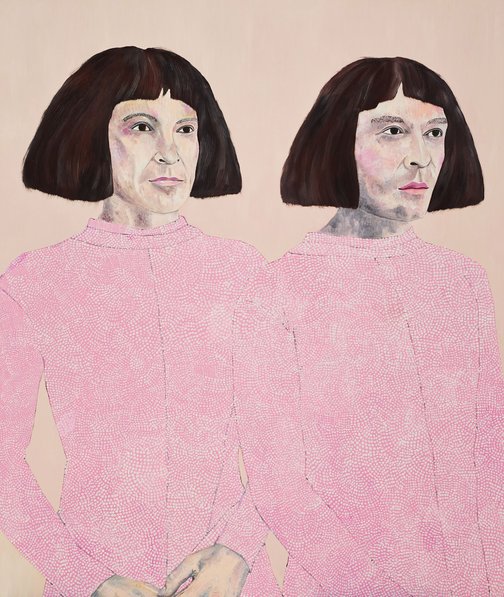 Garrett and Will Huxley are visual artists and performers. When four-time Archibald finalist Sally Ross saw her friends performing in Discordia – the Huxleys’ 2017 show involving a prawn-worshipping, rose-beige-costumed cult – Ross instantly knew she had to paint them.

‘I saw the mysterious potential for art/civilisation to be expressed within the handsome duo’s magical physical presence,’ says Ross. ‘This portrait is a homage to the pure folie of the Huxleys’ performances, as well as hairstyles found in the portraits of Otto Dix and Diego Velásquez. I wanted a deliberately distant, expressionless pose that transforms their glittery bodysuits and cheap, teased wigs into a portrait evoking the timeless silhouettes of antiquity and “old paintings” I so admire.’

Will and Garrett have been partners for 11 years; they are not married. ‘They could be the love children of American artist and mistress of disguise Cindy Sherman and Leigh Bowery, the performance artist and long-time muse of Lucien Freud,’ says Ross. ‘Their carefree art and performance happily exist beyond male or female gender stereotypes. With their band SOS (Style Over Substance) or dressed as Bauhaus worms or inflatable balls, the Huxleys thrive beyond camp, beyond gender, in an imaginative and liberating multi-disciplinary practice.’