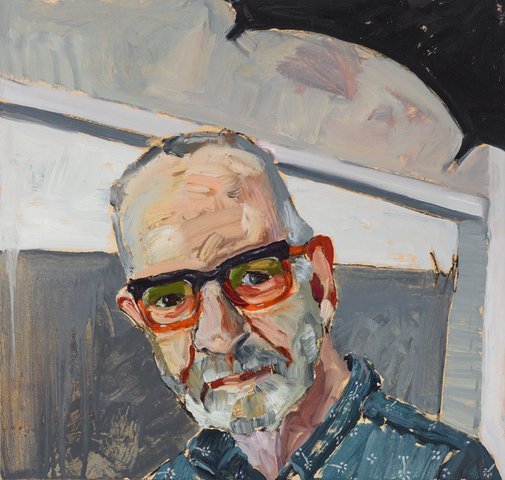 Photographer Gary Grealy won the National Photographic Portrait Prize in 2017 with an intense, gothic image of Alison Mackay and her partner Richard Morecroft. ‘I then asked Gary if I could paint his portrait in return,’ says Mackay. ‘Firstly because of the “mutual portraiture” resonance, but also because I thought it would be hard for him to say no!’

‘Gary’s methodical and precise process in creating an image is entirely different to my more exploratory approach. I made about a dozen portraits of him, trying to capture something of his character, whilst maintaining a vitality and spontaneity in the paintwork.’

Born in the UK in 1966, Mackay has lived in Australia since the early 1990s, first in Sydney and now near Jervis Bay on the south coast of New South Wales, where she has a studio. She trained as a lawyer but has been primarily focused on painting since 2002, after she broke her back in a horseriding accident.

Her subject matter is mainly still life, but also includes portraiture and landscape. She has been a finalist in the Portia Geach Memorial Award, the Black Swan Portrait Prize and the NSW Parliament’s Plein Air Painting Prize. This is her first time in the Archibald Prize.