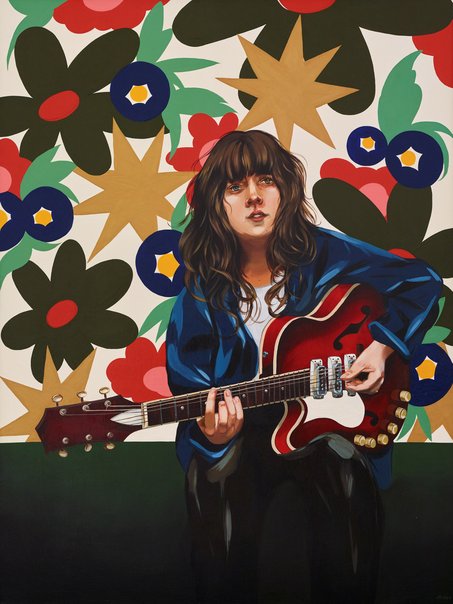 Courtney Barnett is an ARIA Award-winning singer, songwriter and musician. In 2016, she was named the APRA Songwriter of the Year and was also nominated for a Grammy for Best New Artist and a Brit Award for International Female Solo Artist.

‘Courtney and I are friends,’ says Melissa Grisancich. ‘I’m a big fan of her music with its unique mix of rock, folk, indie and grunge. I also love her guitar playing, and see her as a strong representative of the positive shift happening for women in Australian music today.’

After spending time at Barnett’s home taking photographs and sketching various ideas for the portrait, Grisancich decided to focus on Barnett and her guitar. ‘Courtney was happy to sit, quietly playing a tune and looking around the room as if I wasn’t there. She had a casual warmth about her that I wanted to capture,’ says Grisancich. ‘Her music and witty lyrics are quite colourful, so I have used a lot of colour. The background is inspired by 1930s Australian art-deco patterns, which often feature in my work.’

Grisancich was born in 1987 in Mt Martha on the Mornington Peninsula, Victoria, and now lives in Melbourne. This is the first time she has entered the Archibald Prize.