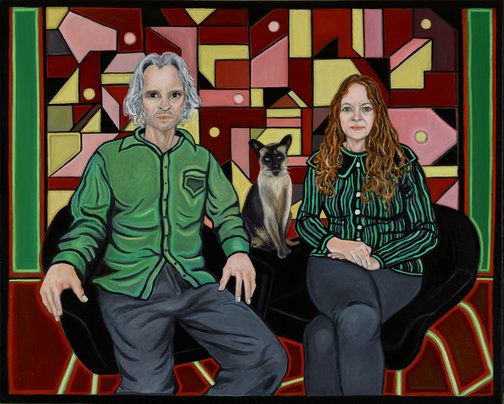 ‘I have known Peter and Susan for many years. They are fellow artists and dear friends,’ says Marina Finlay. ‘I seated them to show their closeness but also their strong individuality. Their cat Coco links them yet creates a space between them.’

The painting in the background is inspired by one of Susan’s. ‘I really loved the patterns so I painted a variation of her theme to suit the picture,’ says Finlay.

Born in 1961 in Sydney, Finlay is a graduate of the National Institute of Dramatic Art (NIDA) and began her creative life as an actor. She learned to paint from renowned artist Judy Cassab for whom she was a model for 30 years. ‘She guided and mentored me,’ says Finlay, who left acting in 1990 to be a painter.

This is her first time in the Archibald though she has had several portraits in the Portia Geach Memorial Award. Her portrait of Hugo Weaving, who was in her year at NIDA, was hung in the 2006 Salon des Refusés. Finlay is also the subject of a portrait in this year’s prize by Karyn Zamel.