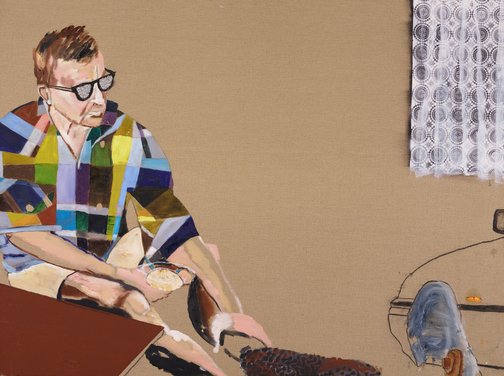 William Mackinnon’s painting is a self-portrait. ‘For many years, I got jobs in a self-styled apprenticeship where I could learn from exceptional artists,’ he says. ‘I watched Jeffrey Smart paint, helped catalogue the Roger Kemp estate, worked as Tim Maguire’s studio assistant, and as Kim Westcott’s printmaking assistant. I was an intern at the Peggy Guggenheim Museum in Venice and at Donald Judd’s Chinati Foundation in Texas.’

In 2010, Mackinnon was a field officer at Papunya Tula, an Aboriginal artist cooperative in the Western Desert. ‘That is where this image comes from. Sitting with Naata Nungurrayi, 500km west of Alice Springs, mixing her paint and watching her sing and paint, was an extraordinary privilege,’ he says.

At age 28, Mackinnon went to the Chelsea College of Arts in London, then completed a Master of Arts at the Victorian College of the Arts. He now lives between Melbourne and Spain, and paints full-time. ‘Looking back, it’s not a bad CV but at the time it was precarious and disjointed. I want that to come across in the painting. As an artist, you have to live by your wits, create opportunities and find your own voice. It is scary at times but an incredibly rewarding way to be in the world.’

This is Mackinnon’s first time in the Archibald Prize and the second year in a row he has been a finalist in the Wynne Prize.