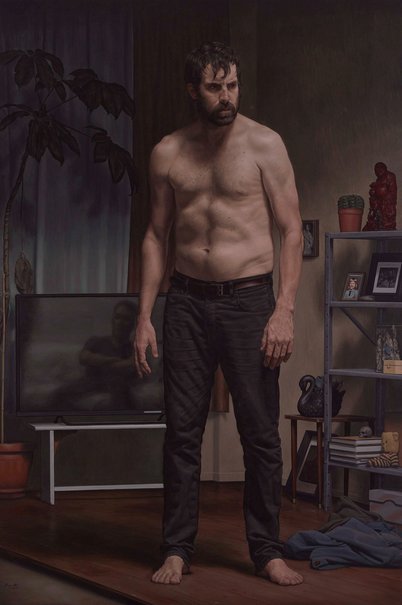 Marcus Wills met Wright through a mutual friend and thought he’d make a great subject for a painting he had been contemplating. The sitting took place at Wills’ studio where he set up a scene reminiscent of a crime drama, with Wright as the protagonist.

‘I hoped to load the painting with things which seemed to be symbolic or important – some things are, whereas others are not,’ says Wills. ‘I thought to show Tom as if he’s not dressed for anything, in a living space and in the middle of something. I hope when people contemplate the scene they’ll make their own story of what they find.’

Born in Kaniva, Victoria in 1972, Wills graduated from the Victorian College of the Arts in 1995 and was awarded the 2000 Brett Whiteley Travelling Art Scholarship. He has been a finalist in the Sulman and Wynne Prizes. This is his fourth time in the Archibald Prize, which he won in 2006.