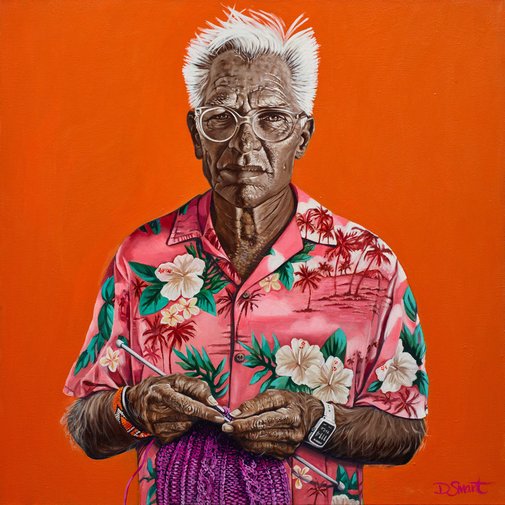 In 1958, the sight of a boy knitting was a confronting one. Today, John Macarthur has an international reputation for his unique and colourful knitwear, featured in magazines such as Vogue and Harper’s BAZAAR. In many a discerning woman’s closet, from Elle Macpherson’s to Miranda Kerr’s, is a well-loved John Macarthur knit.

But it was Macarthur’s humour and humble disposition that compelled Dee Smart to paint the man fondly known as ‘the mayor of Bondi’.

Macarthur’s world revolves around colour, his home is a riot of perfectly harmonised, vibrating hues. Smart chose to paint him in monotone to anchor him amongst this joyful riot.

Born in Adelaide in 1966, Smart moved to Melbourne as a teenager to attend the Victorian College of the Arts ballet school. She then studied acting in Sydney and went on to enjoy a successful career in film and television. Homebound with her firstborn daughter 15 years ago, she picked up her first paintbrush. Nights were spent at life drawing classes and days with nappies. Smart’s insatiable need to illuminate the human condition has never waned. She describes herself as being ‘beyond excited’ to be having her first Archibald experience with Macarthur.