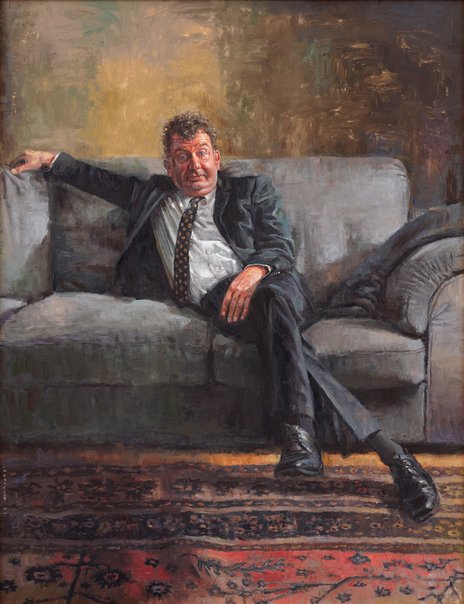 ‘Francis Greenslade is a household face, not a household name. He’s been around for a while but the name won’t ring any bells. He’s familiar, likeable and I’m a fan,’ says Meatchem.

‘Francis was quite happy for me to paint his portrait and invited me to his house for a sitting. Tonally, I was inspired by the elegant Oscar-night celebrity portraits by photographer Mark Seliger. I wanted to capture a similar stylish mood in my painting, but with a more humorous edge. Francis lounges “gracefully awkwardly” in his good suit on his favourite sofa. His expression is typical Francis whimsy. My intention was to create an image that makes you smile and matches the character of this talented man.’

Born in Sydney in 1958, Meatchem studied for a year at the Julian Ashton Art School. After a 40-year career as a director of television commercials, he recently took up painting full-time. This is his first time in the Archibald Prize.