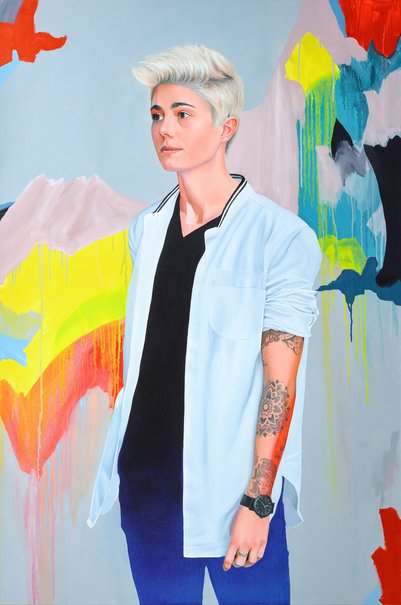 Kim Leutwyler’s subject, Michelle Heyman, is an openly gay athlete who represented Australia at the Rio Olympics in 2016.

‘I approached Michelle after we’d both appeared on the LOTL Magazine Power List and the Cosmpolitan Cosmo Rainbow List, each of which celebrates influential and inspiring LGBTQI+ and allied Australians,’ says Leutwyler.

‘As a striker for the Matildas and Canberra United, Michelle is one of Australia’s most impressive sportswomen. She is passionate about being a role model for kids, and openly speaks out against bullying, encouraging young people to be their authentic selves.’

In her portraits, Leutwyler always tries to incorporate colours that reflect her sitter’s personality. ‘Michelle is really drawn to greys and bright blues, and likes to wear black and white with little pops of red. I also incorporated a bright cadmium chartreuse, reminiscent of her soccer uniform. I hope this portrait will stimulate a conversation about inclusivity, equality and authenticity,’ she says.

Born in the United States in 1984, Leutwyler migrated to Australia in 2012. Based in Sydney, she works in a variety of media. Her current body of work features paintings dealing with images of beauty, gender and queer identity. She was a finalist in the 2015 Archibald Prize.