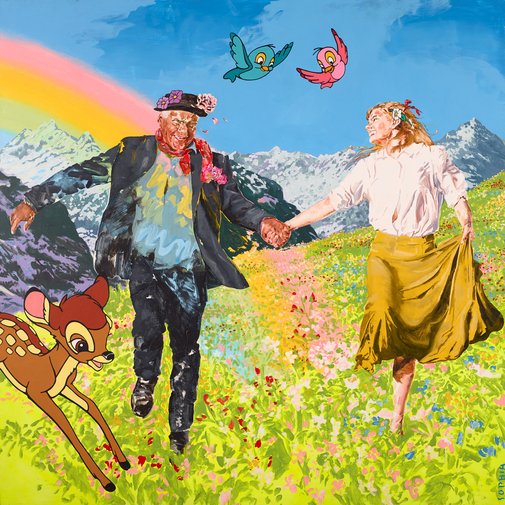 ‘What does white guilt look like? Is there a “hierarchy of oppressions”? Do we live in a nation of roughly equal opportunity? Or do we live in a fantasy land, a cracked cartoon landscape brimming with fairytale myths of freedom and democracy?’ asks Sophia Hewson.

‘The Archibald Prize was named after the founding editor of a magazine [The Bulletin] known for its racist editorial declarations; from 1999 until 2005 the prize was sponsored by the Colonial Foundation Trust; and in 96 years “we” have never awarded the prize to a person of colour. It’s a situation for which this work is no remedy,’ says Hewson.

‘What does it mean for us to be participating in a prize that’s never been awarded to a person of colour? For decades, artist and activist Richard Bell has worked to raise these difficult questions and to provocatively, intelligently and playfully challenge our conceptions.’

Born in the UK in 1984, Hewson has exhibited extensively locally and internationally. Last year she released a controversial video work, Untitled (are you ok bob?). This is her third time in the Archibald.