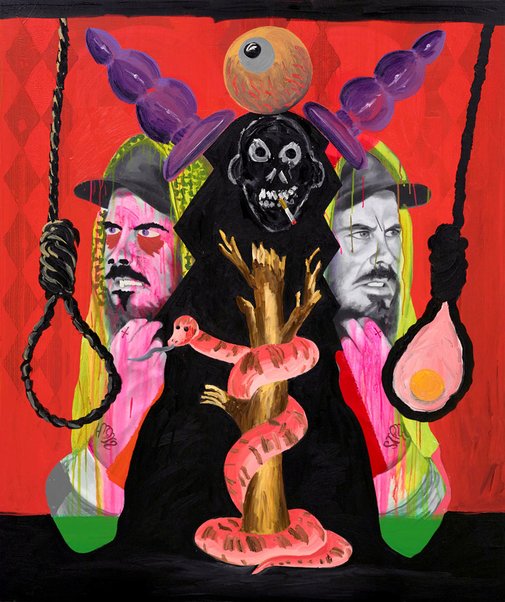 David Griggs’ self-portrait makes reference to the biblical story of Cain, the firstborn son of Adam and Eve, who murdered his brother Abel.

‘I don’t believe in the duality of man, I believe in infinite complexities. However, in saying that, we all have a twist of Cain in us. My twist, my footprint, might be larger than others,’ says Griggs.

‘This painting is a dual self-portrait – not good or evil, more like sanity and that flipside word that needs to be talked about more: madness.’

Griggs says that he decided to create a self-portrait for two reasons. ‘The first is the idea that painting one’s self, the artist, gives power back to the artist – a small political ideal needed in the public arena. Secondly, I wanted to depict that twist I mention and explore my own darkness while painting with humour, colour and fun.’

Born in Sydney in 1975, Griggs has studios in Sydney and in the Philippine capital of Manila. His first major survey exhibition in Australia will be held at the Campbelltown Arts Centre this year. This is his sixth time as a finalist in the Archibald Prize.