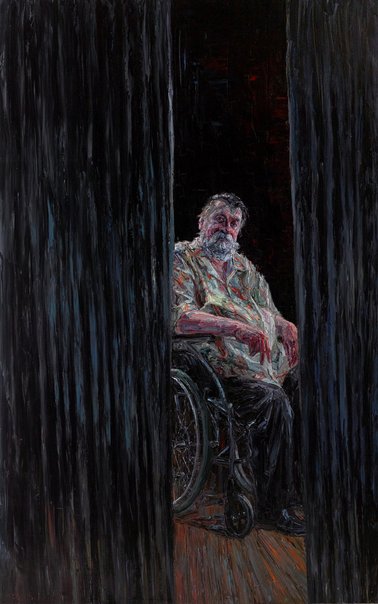 This is the second time that Jun Chen has been represented in the Archibald Prize with a portrait of Ray Hughes, after another of his paintings of the former gallery owner was selected as a finalist in 2009.

‘Ray was my first dealer and worked with me for ten years. He retired last year,’ says Chen. ‘Last year, I attended his 70th birthday party. Although he wasn’t terribly well and had to sit in a wheelchair, he was still very enthusiastic about life, which touched me and I decided to paint another portrait of him.’

‘I’ve known Ray for quite a long time and understand his positive attitude to life and his passion for art. In this portrait, I emphasised his expression and used lots of black to make the painting very strong and powerful.’

Born in China in 1960, Chen now lives in Brisbane. He graduated from Guangzhou Academy of Fine Arts in China and also has a Master of Fine Art from the Queensland University of Technology. He has been a finalist in the Sulman Prize on five occasions and in the Wynne Prize three times. This is the fifth time his work has been hung in the Archibald Prize.

Highly commended in the Archibald Prize 2017