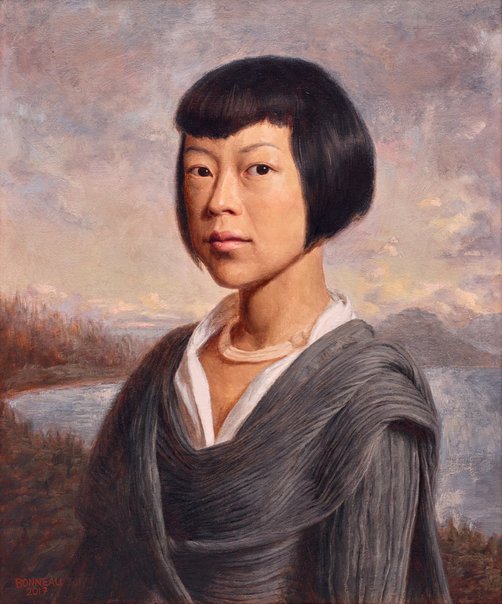 Ayako Saito is a sculptor whose works are inspired by the sensuality of the figure. Her large outdoor sculptures have been exhibited in Sculpture by the Sea at Bondi on four occasions.

Andrew Bonneau met Saito 18 months ago in Sydney. ‘We spoke about many things while I painted her portrait, including the challenges of artmaking. She has an incisive mind, and her observations of Australian culture from a Japanese perspective were fascinating,’ he says.

The portrait was painted from life in ten four-hour sittings over a couple of months, while the landscape background comes from a combination of imagination and previous plein-air studies.

‘My influences in making this painting include the Italian Renaissance and German Romanticism, but my underlying motivation was to capture something of Ayako’s presence through direct and patient observation,’ says Bonneau.

Born in Tasmania in 1981, Bonneau graduated from the National Art School in 2003 and subsequently studied with artist Charlie Sheard and at the Grand Central Academy, New York. He has been a finalist in many art prizes including the Doug Moran National Portrait Prize. He is the resident artist at Sydney Grammar School for 2017. This is his first time in the Archibald Prize.