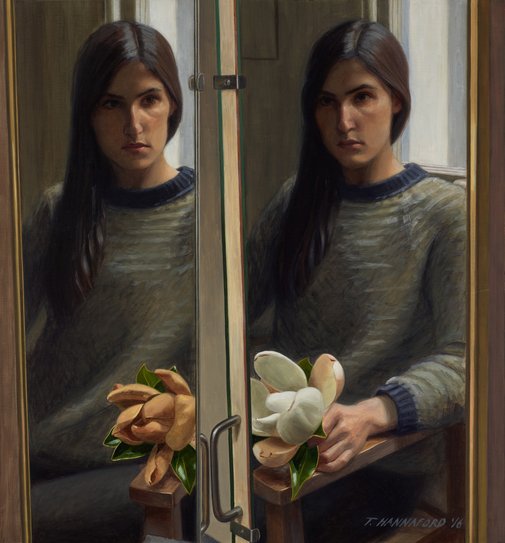 ‘My painting was inspired by a photograph of my mother holding me as a baby. She was the same age that I am now, and the lighting in the room where she stood was similar to the lighting in my studio,’ says Tsering Hannaford.

‘The magnolia itself informs the portrait. Its smooth petals are initially heavy with a rounded form and heady scent but these quickly brown and fall away, eventually leaving only the enduring foliage. It alludes to choices, the passing of time, fertility and decay.

‘The angled lines of the gold mirror, which are repeated in the framing, evoke an element of claustrophobia in the picture, adding a certain pressure and intensity. The portraits are twice and thrice reflected in the two mirrors and a telltale green tinge washes over the entire painting. This, combined with a muted lighting from overcast days, creates a feeling of distance and detached observation. The image tells of the process of its creation, too. It records the time that passed as I painted it through the magnolia’s transition.’

Born in Adelaide in 1987, Hannaford began painting after finishing a Bachelor of Arts in Psychology and a Graduate Diploma in Art History at the University of Adelaide. She has been a finalist in the Portia Geach Memorial Award three times (highly commended in 2014), and has been hung twice in the Salon des Refusés. She was a finalist in last year’s Archibald Prize.