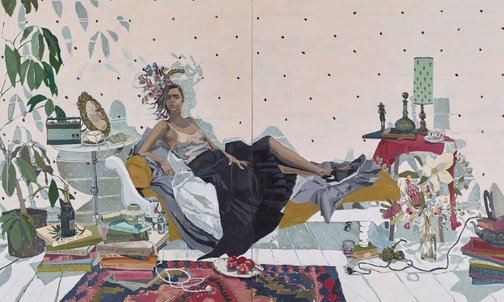 Samantha Harris is a fashion model. Her mother is from the Bundjalung people, the traditional custodians of the land of north-east NSW, and her father is of German/English descent. She made her catwalk debut in 2005 at Australian Fashion Week and in 2011 was chosen as the David Jones ambassador for young women’s fashion.

Zoe Young grew up in the Snowy Mountains with international model Anneliese Seubert as a close friend. Seubert often sits for Young, whose work has always been influenced by her love for pattern, drama and fashion.

‘I wanted to create an ode to beauty,’ says Young. ‘I read an article about Sam Harris and her mother Myrna, who used to take Sam to op shops as a kid to get clothes for beauty pageants. I thought, what a wonderful, creative thing to do with your daughter and what a beautiful girl Sam was. Luckily, Anneliese knew her so it wasn’t hard to get introduced.’

Young had a preliminary sitting with Harris during this year’s Australian Fashion Week. She then set up the scene in her studio and painted the props and flowers before Harris arrived for another sitting. The pose is taken from Manet’s Olympia.

Born in Sydney in 1978, Young is now based in Bowral. She graduated from the National Art School in sculpture. A self-taught painter, she was a finalist in the 2014 Archibald Prize with a portrait of Olympic snowboarder Torah Bright.