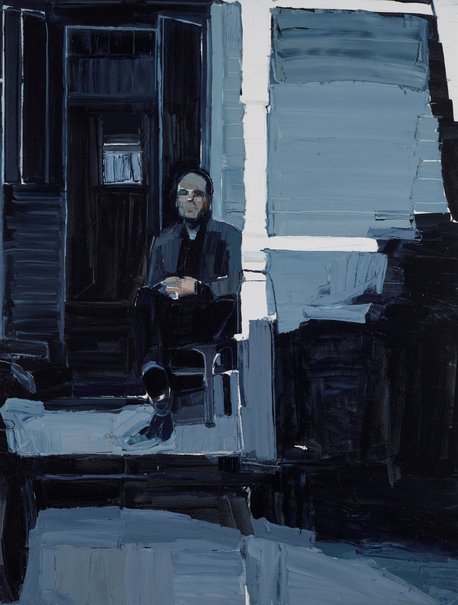 Terry Serio is a well-known actor and a musician. ‘I have been getting to know Terry over the last couple of years since my boyfriend Simon Relf started a band with him called Oh Reach,’ says Clara Adolphs. ‘Terry is a commanding and intriguing presence on stage. He also has an amazing face.

‘I don’t often paint from life. My usual practice and interest lie in abandoned old photographs. I liked the idea that Terry was an actor and that, together, we could create a scene for a painting, like one of the photographs I often use as a reference. I had him sit for me on the front porch of his beautiful old home, with his motorbike in the front yard.

‘Over the week or so that it took to paint this scene, it became clear that the most interesting part of the painting was Terry himself. So I discarded the props. However, I think they played an important role in the making of the final portrait.’

Born in Sydney in 1985, Adolphs has a Bachelor of Fine Art from the College of Fine Arts, University of New South Wales. She won the 2012 Young Emerging Artist Award at the Mosman Art Prize. She is a three-time finalist in both the Portia Geach Memorial Award and the Brett Whiteley Travelling Art Fellowship. This is her first time in the Archibald Prize.