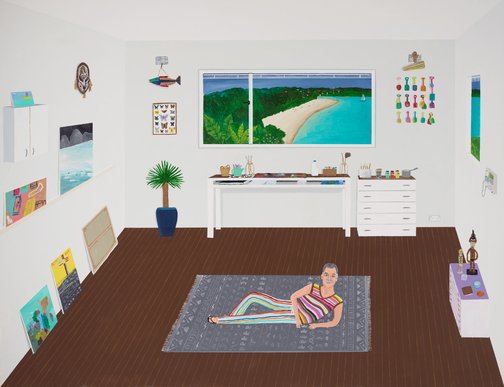 Sydney artist Ken Done first came to public attention with a small run of unique T-shirts printed with a beautifully simple and bold drawing of Sydney Harbour, which became an iconic Sydney image.

After a highly successful international advertising career as an art director and designer, he became a full-time painter in 1980 and has since had over 50 solo shows in Australia and overseas. He is also a finalist in this year’s Wynne Prize.

‘I chose to paint Ken Done because I have always loved his work. I went to Ken’s house and spent some time with him in his studio. It was surreal being there after admiring his paintings for so long,’ says Marc Etherington.

‘All the things in his studio really spoke to me: scattered paintings, spades he had found on his daily walks along Chinamans Beach, a paint-covered phone, masks and sculptures from his travels, the incredible view, and Ken relaxed in his studio. All of these elements were the starting point for this portrait.’

Born in Sydney in 1973, Etherington is a self-taught artist who makes paintings and wooden sculptures that reference his daily life as well as popular culture. He paints in his garage or at his dinner table and steals a lot of his ideas from his children Ava and Lars. He was a finalist in last year’s Archibald Prize and is a finalist in this year’s Sulman Prize.