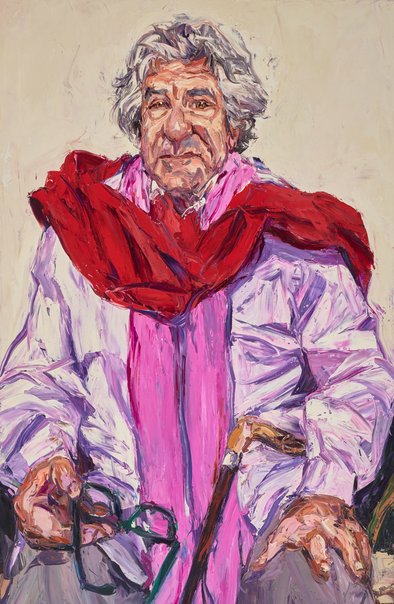 Peter Weiss is one of Australia’s great arts patrons. Although synonymous with Australian fashion during the 1970s, ’80s and ’90s, music was always his first love.

Awarded an Order of Australia in 2013 for distinguished services to the arts, particularly orchestral music, Weiss has supported the Sydney Symphony Orchestra, the Australian World Orchestra and the Art Gallery of New South Wales, among many others.

His passion for the cello, which he played as a child, inspired him to lend a 1729 Giuseppe Guarneri ‘filius Andreae’ instrument to the Australian Chamber Orchestra’s principal cellist.

Nicholas Harding first encountered Weiss when he purchased Harding’s portrait of Margaret Olley, hung in the 1998 Archibald Prize. ‘I always remember that when he asked me how much it was, he said, “Are you sure that’s enough?”, which illustrated his generous approach to the arts,’ says Harding.

The sitting for this portrait took place in the backyard of Weiss’s Woollahra home. Harding painted him as he was, wearing a scarf or two over his shoulders as he so often does. ‘It was good for the colour composition,’ says Harding.

Born in England in 1956, Harding came to Australia in 1965. He has been an Archibald finalist on 15 previous occasions, winning it in 2001. He also won the Dobell Drawing Prize in 2001. He has been in the Sulman Prize three times and is a finalist for the seventh time in this year’s Wynne Prize.