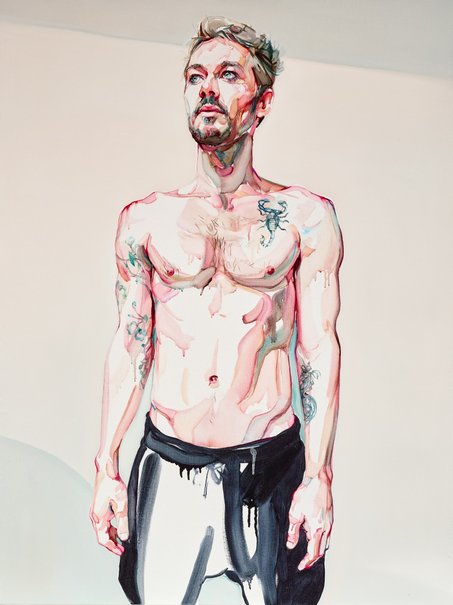 Singer/songwriter Daniel Johns has been a rock musician since his teens, first with Silverchair and then The Dissociatives. He recently released the critically acclaimed solo album Talk after an eight-year hiatus.

Julian Meagher got the idea for the portrait while talking about Johns with his brother. ‘They both suffer from the same form of autoimmune arthritis, and this year I discovered I have bone trouble in both hips as well. We’re three young men in chronic pain, and I was fascinated with how Daniel has dealt with his,’ says Meagher.

‘He introduced me to grunge as a teenager, when he was still a teenager himself. Over a 20-year career, he’s divulged his ups and downs honestly. He’s like that in person too.

‘We sat outside his studio and within two minutes he asked, “Do you want the eyeliner?” Of course, that was exactly what I’d wanted. We spent time in drizzling rain looking for the right light, a kind of symbolic spotlight: he’s that onstage deity, but also a bit fragile.

‘The vantage point is slightly below the subject as if we’re viewing him from an audience. But he’s looking off in another direction. I wanted to show that ambiguity and thoughtfulness you get with Daniel.’

Born in Sydney in 1978, Meagher left his job as a doctor ten years ago to paint full-time. He studied the Atelier method in Florence. A regular in major art prizes, he was an Archibald finalist in 2014 and is a finalist in this year’s Wynne Prize.