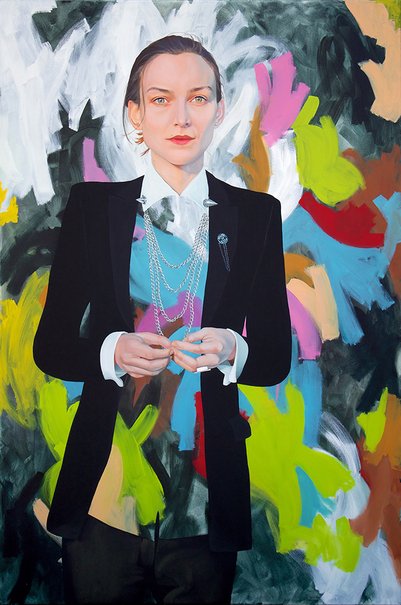 Kim Leutwyler’s subject, Ollie Henderson, is an activist, designer and one of Australia’s top models. Aged just 26, she has received global recognition for founding the fashion label and youth empowerment project House of Riot, which uses fashion as a vehicle for encouraging young people to start productive conversations about social change in Australia.

Henderson is a friend of the artist’s. ‘I typically create paintings of LGBTQI-identified and queer-allied women, most recently focusing on those who have impacted my life in some way,’ says Leutwyler.

‘My work explores the line between glorification, objectification and modification, using patterns and abstractions from each subject’s local and social environment as a subtle vernacular to portray the fluidity and complexities of identity. As a feminist member of the LGBTQI community, Ollie speaks openly about the objectification inherent to a career in modelling, and the unrealistic modification of images that set unattainable standards of beauty.’

Born in America in 1984, Sydney-based Leutwyler migrated to Australia in 2012. She works in a variety of media including painting, installation, ceramics, print media and drawing. She holds concurrent Bachelor degrees in Studio and Art History from Arizona State University, and additionally graduated from the School of the Art Institute of Chicago with a Painting and Drawing degree. Her artwork has been exhibited in galleries throughout the United States and Australia, and she is part of the collections at both the Naestved Cultural Center in Denmark and the Brooklyn Art Library in New York.