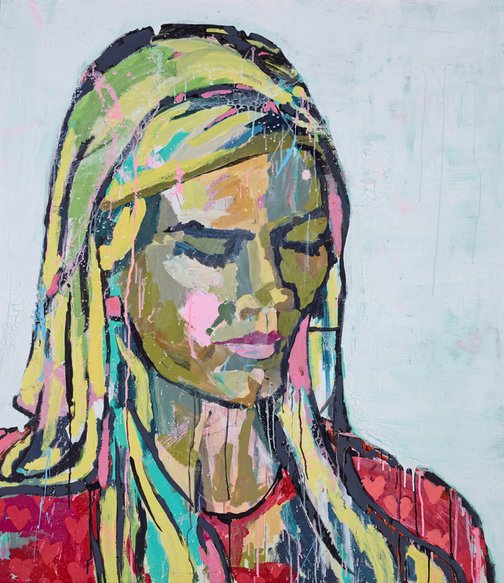 Torah Bright is a champion snowboarder and Australia’s most successful female winter Olympian. She is also a model and designs her own collection of snow apparel for the Roxy label.

Zoe Young grew up on a farm in Thredbo Valley and trained as a ski racer with Bright’s older siblings. ‘When I returned home after graduating from art school in 2012, I was having my hair done by Torah’s sister Abish, the local stylist in the mountains, and we talked about snow, art, the Olympics and Torah,’ says Young.

‘I was looking for a subject for the Archibald who was not only well-known but someone I admired and related to. Abish said Torah was in town and the next thing I knew we were in Cooma catching up.

‘Originally I planned to do an epic painting, something larger-than-life that captured the excitement and daring tricks of her sport, something really bright, maybe even with a splash of glitter. But after the sitting, I looked through the sketches and thought, “I’m just going to paint what I saw”. I caught Torah in an introspective moment, a calm silence after the chaos of recent months, somewhere between the guts and the glory, and her private and public lives.’

Born in Sydney in 1978, Young graduated in sculpture at the National Art School but considers herself principally a painter. Her work is influenced by the rustic aesthetic of the mountains.