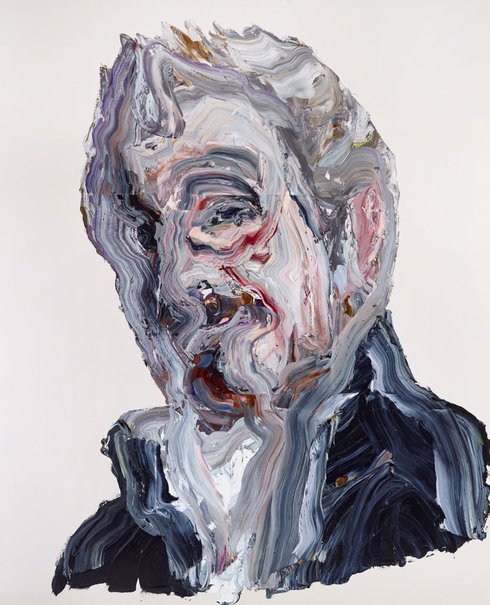 Richard Roxburgh is one of Australia’s leading actors. This portrait of him marks the 11th time Paul Ryan has been an Archibald Prize finalist. ‘It was Rox’s inspired character Cleaver Greene in the television series Rake that was the catalyst for my desire to paint him,’ says Ryan.

‘My regular practice is an exploration of ideas and images of early colonial men and wild colonial boys: lieutenants, squatters, cowboys and dandies. Cleaver Greene is a contemporary portrait of the wild colonial boy. A larrikin, drunk, womaniser and dandy, he falls somewhere between hero and anti-hero. Some of us want to be him, until he wakes with a hangover in another man’s bedroom with another man’s wife.

‘The painting is a portrait of an idea of Rox. He is dressed in colonial coat and shirt. It has elements of a likeness but is clearly not a photographic likeness. In the early stages it looked more like Rox but I wasn’t happy with the paint. I moved it around in vigorous swirls with large palette knives. In an instant the image changed and came to life. I had broken free from the constricting desire to capture the face. For me, the best portraits move on from likeness and go deeper.’

Born in Auckland in 1964, Ryan has had regular solo exhibitions since 1988. He has been a finalist in the Wynne Prize three times and the Sulman Prize four times and won the 2010 Paddington Art Prize for landscape.