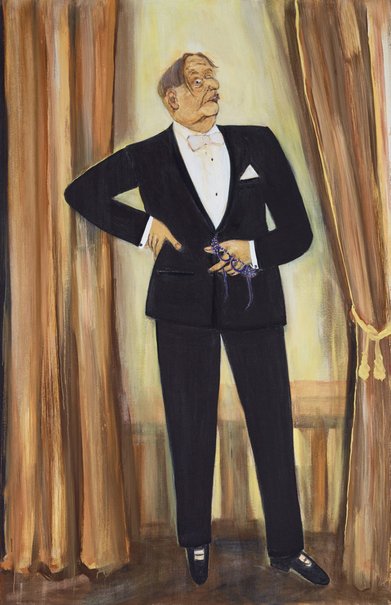 ‘During his Weimar cabaret in Sydney last year, Barry Humphries commended the crowd as being “well dressed for a Sydney audience”. The same could have been said of the performer,’ says Rodney Pople.

‘Later, as he transitioned from performance mode to talking with me backstage, I glimpsed a momentary uncertainty behind the facade of Humphries’ various theatrical personae. It is this image, in addition to the sketches made both backstage and from my seat in the audience that evening, on which the painting is based. The result has, to quote Humphries’ response upon seeing the finished painting, achieved a “more than flattering likeness”.

‘The portrait takes its composition from Max Beckmann’s Self portrait in tuxedo 1927, chosen because of Humphries’ interest in Weimar culture. The work of both men combines unsentimental insight and sharp satire to comment on the contemporary society of their respective eras. Where the Beckmann self-portrait conveys a sense of assurance, this painting reveals insight into the man as he moves between roles from stage to sitter. Beckmann’s portrait describes a man at the height of his powers; similarly, this portrait of Humphries celebrates the outstanding career of a man at the pinnacle of success in his 80th year.’

Born in Launceston in 1952, Pople was educated at the University of Tasmania, the Slade School of Art, London, and the New York Studio School. His work is currently the subject of a solo exhibition at the Australian Centre of Photography, Sydney.