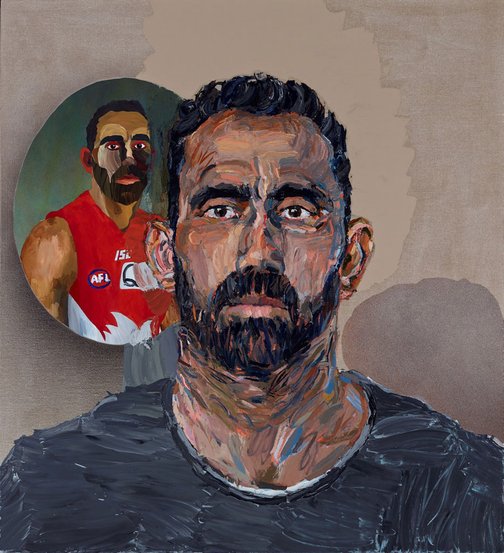 In 2014, Adam Goodes broke the record for most AFL games played by an Indigenous footballer. This honour was added to his long list of accolades as a dual Brownlow Medallist, dual premiership winner, four-time All-Australian, member of the Indigenous Team of the Century, and Australian representative in the International Rules Series. In 2014, he was named Australian of the Year for his community work through the GO Foundation and his advocacy against racism.

‘I have wanted to paint Adam’s portrait for years,’ says Alan Jones. ‘I’m a big Swans supporter and Adam is a champion of the game. I have enormous respect for the strength and integrity he shows both on and off the field.’

‘I chose to paint a dual portrait to convey the many facets of Adam’s life. I wanted to capture his warm, gentle nature quite separately to the footballer fans see each week. Adam is an amazing athlete but also so much more than that: he is a son, a brother, an extremely proud Indigenous Australian (Adnyamathanha and Narungga on his mother’s side), an active campaigner for constitutional recognition and a great role model in so many ways.’

Born in Sydney in 1977, Jones was awarded the prestigious Brett Whiteley Travelling Art Scholarship in 2004. Other awards include the Paddington Art Prize, Fisher’s Ghost Art Award and the Allan Gamble Memorial Art Prize. He was finalist in the 2013 Archibald Prize with a portrait of Pat Corrigan AM.