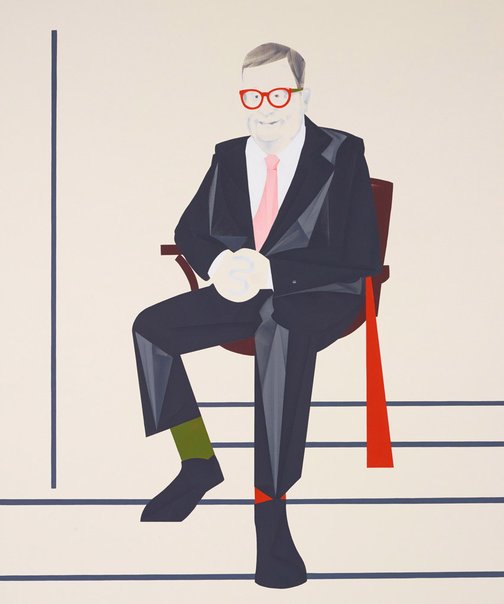 Mitch Cairns has known the subject of this portrait since his final years at the National Art School when Reg Richardson first collected his work. Cairns’ studio is now in the same building as a self-storage business that Richardson operates.

‘Reg has made significant social contributions through his philanthropic efforts, raising considerable funds towards Indigenous healthcare, melanoma research and the visual arts,’ says Cairns. ‘He is also a life-long supporter of the South Sydney Rabbitohs football team.

‘In making this portrait, I tried to depict something of the way Reg conducts himself. His manner is characterised by an air of casual distinction in which education, wit and anecdote sit comfortably without pretension. He is both affable and compelling; a tireless champion for all that he believes in. I hope this portrait, like Reg, is somewhat humble yet at the same time resonant with magnitude.’

Born in Camden, New South Wales, in 1984, Cairns has been exhibiting for 10 years and has been actively involved in a number of artist-run initiatives in Sydney. In 2012, he won the Brett Whiteley Travelling Art Scholarship. He has previously been a finalist in both the Archibald Prize (2013) and the Doug Moran National Portrait Prize (2013, 2010). Earlier this year he completed a major mural commission for Shepparton Art Museum in Victoria. Between 2005 and 2007, Cairns was studio assistant to the late Adam Cullen. A book of his cartoons is currently in production with publisher Gang Atelier.