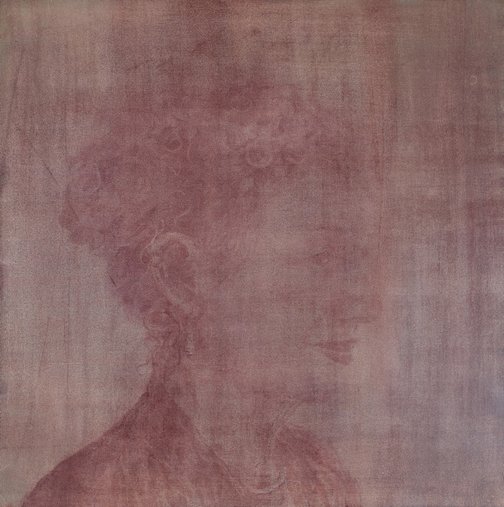 Mike Barnard’s subject is his mother Judy who was diagnosed with a rare form of cancer in her cheek at age 61. ‘Capturing mum’s grace and humility during seven years of treatment was something I’d thought a lot about,’ says Barnard. ‘Although she was stoic, it was a constant struggle for her. You knew that at times she was prevailing and at other times the illness was prevailing.

‘The ravages of cancer are obscene. It’s a crudeness that surpasses representation. So I imagined her illness not in literal terms, but in the treatment I gave to the work: an erasing, a paring back of material and form that was its own form of violation. At the same time, I wanted her grace to ring through. The central ambiguity of the painting is that her profile is neither inscribed on a background nor subjugated by a foreground, but is somewhere in between. That’s really what the painting is about. This beautiful fighter may not be triumphant, but she’s certainly undiminished.

Born in Sydney in 1973, Barnard’s practice is painting-based but includes photography, sculpture, print and video work. His paintings are often ambiguous or disquieting, made with a limited palette of muted colours painted using a soft-brush technique that makes the image appear to ‘float’, to emerge and recede. This is his first Archibald Prize entry.