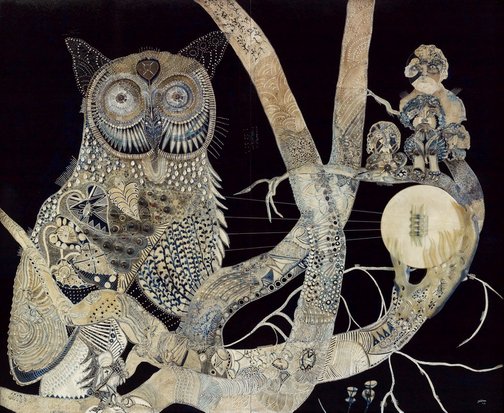 ‘All the elements in my Self-portrait: Morning Bay could be seen as representations of who I am: the owl, the mangrove tree, the instrument and the figures resting on the tree branch,’ says Joshua Yeldham.

Yeldham’s work explores a spiritual connection to landscape. He now works on the Hawkesbury River.

In this self-portrait, Yeldham says that: ‘the instrument describes a connection between science and nature, the melody that science played, surprisingly, in my own life when my wife and I were trying to have children through IVF. The owl, the tree and the instrument have been incredibly potent energies in my work over time, but they also change and shift in their meaning, just as the mangrove tree seeks stability in the mud.

‘In the figures there is a sense of myself as a developed creative force, but also a version of my young self, holding a brass bell, which is my link to the melodic, the creative: a very vulnerable form. On either side are two mysterious forms, which are probably my children. I didn’t consciously set out to include them in a self-portrait. But maybe they are so powerful that they decided for me!’

Born in Sydney in 1970, Yeldham has a Bachelor of Fine Arts from Rhode Island School of Design in the US. He is represented in the Wynne Prize for the fourth time this year and has also been in the Sulman Prize twice.