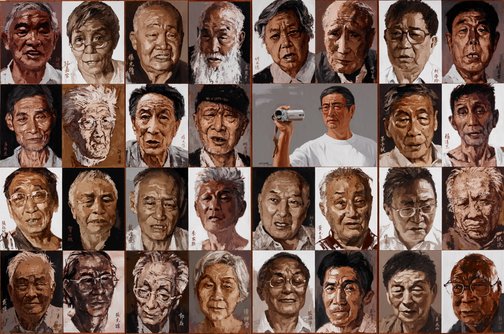 Xu Wang’s painting is part of a series of work called The silenced: from 1957 to today, in which he pays homage to so-called ‘rightists’ who dared to speak out for democracy and freedom of speech.

In 1957 when Mao Zedong announced ‘Let a hundred flowers bloom, let a hundred opinions contend’, it was an appeal for advice from intellectuals on how to reform the Chinese Communist Party. However, he had not anticipated that a significant number would criticise the CCP’s one-party dictatorship. Mao responded by secretly launching the Anti-Rightist Movement. More than 550,000 intellectuals were branded ‘rightists’ and most were sent to labour camps, where large numbers died as a result of starvation, excessive physical exertion and suicide.

Born in China, Wang came to Australia after the Tiananmen Square protests in 1989. ‘While enjoying a life of personal security in Australia, I am still deeply affected by the terrible social and political injustices that continue to occur in China,’ he says.

In 2009 and 2012, he interviewed and filmed more than 140 ‘rightist’ survivors, who are mostly now in their 70s and 80s and still waiting for a public apology and compensation. These are some of them.

Wang trained as a traditional Chinese brush and ink painter in Beijing. He has a Bachelor of Fine Arts (Honours) and Masters in Fine Art from the College of Fine Arts in Sydney. Primarily a figurative and landscape artist, this is his fourth time in the Archibald Prize.