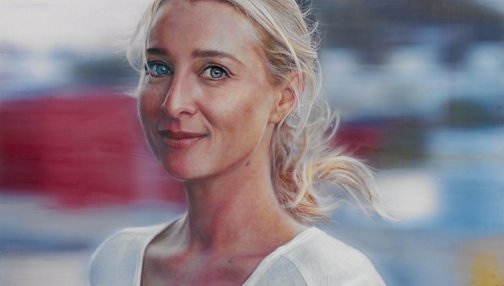 Keddie is one of Australia’s most popular actors, best known for her award-winning performances in television shows Offspring and Paper giants: the birth of Cleo in which she played Ita Buttrose.

‘I had so many ideas about how to paint it that I didn’t quite know which way to go,’ says Fantauzzo. ‘In the end I decided it needed to be honest and simple. A face can display so much emotion and Asher’s eyes tell you so much of the story.’

Arriving home late one evening, Keddie gave Fantauzzo a look, which proved to be the key to the portrait. ‘I knew she’d had a hard day and so was relieved to be home,’ says Fantauzzo. ‘It was a look of real happiness.’

The wash that Fantauzzo has used for the background represents the chaos of a hectic life. Against that Keddie is a picture of composure and contentment.

Renowned as a portrait artist, this is Fantauzzo’s fifth time as an Archibald Prize finalist. He won the 2011 Packing Room Prize with a painting of Matt Moran and the People’s Choice Award in 2008 and 2009 for paintings of actor Heath Ledger and child actor Brandon Walters from the film Australia. His portrait of Ledger was highly commended by the judges.