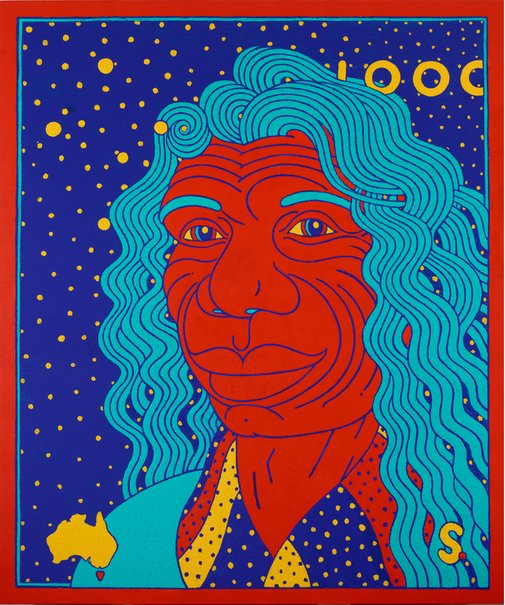 Martin Sharp’s subject is acclaimed Aboriginal actor David Gulpilil who has appeared in such films as Walkabout, Storm boy, Rabbit-proof fence and The tracker. A Yolgnu man, Gulpilil lives a traditional lifestyle in north-east Arnhem Land when he is not acting. He was awarded a Member of the Order of Australia in 1987 and an Australian Centenary Medal in 2001.

‘I first saw David in Walkabout,’ says Sharp. ‘I was amazed at his performance. A new beauty had come into the world of cinema. I first met him when he was 20 when he was working on Mad Dog Morgan. I wanted to include him in Street of dreams, my film with Tiny Tim. He came to visit me, sang some songs and told me some stories.’

Some years later Sharp saw Gulpilil being interviewed by Margaret Pomeranz at the Sydney Opera House. They met up afterwards. ‘As we stood on the promenade an Aboriginal lady approached David and garlanded him with a scarf in the colours of yellow, red and black. I realised he was being honoured, this man who stood with one foot in the ancient world and one in the modern. I saw the great courage it took to be him.’

Later that day Gulpilil went to Sharp’s home. Photographer John Lewis arrived out of the blue and took a photo. ‘It revealed a silent David, a man of gentle wisdom. This photo became the basis for the portrait,’ says Sharp. ‘I wanted to honour David as he had been revealed to me that day. He requested that the portrait be my design for the thousand dollar bill. David felt keenly the disparity of what he was paid as an actor and the other actors who were paid so much more.’

Born in Sydney in 1942, Sharp studied at the National Art School and first exhibited in 1965. He was art director of Oz magazine from 1963 to 1965, and in 1971 founded the famous Yellow House near Kings Cross. He has also worked as a cartoonist, songwriter and filmmaker.