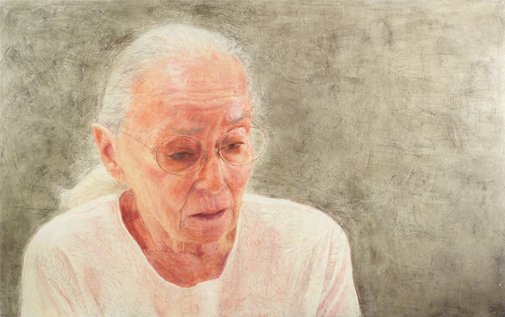 Jenny Sages was a finalist in last year’s Archibald Prize with a portrait she painted of her beloved husband Jack in the last year of his life, entitled My Jack.

‘Jack’s portrait was very personal and meaningful and I was so deeply in my grief that the idea of painting another portrait seemed trivial,’ says Sages.

‘At the time, the Tweed River Art Gallery was showing a large exhibition of my work as part of a travelling exhibition for the National Portrait Gallery. The exhibition was accompanied by a wonderful documentary by filmmaker Catherine Hunter, which included footage of Jack.’

‘My daughter Tanya and I visited the exhibition one morning to take some photos. We walked into an unusually quiet gallery where Jack’s voice was looming loud and clear. We looked at each other and both started sobbing. Tears flowing, Tanya picked up her camera and began to register my grief. That morning resulted in my self-portrait, After Jack.’

Born in Shanghai of Russian parentage, Sages came to Australia in 1948. She studied at East Sydney Technical College and the Franklin School of Art in New York. After freelancing as an illustrator for 30 years, she has painted full-time since 1985. She has been highly commended in the Archibald seven times, most recently in 2006 for her portrait of artist Hossein Valamanesh. She won the Wynne Prize in 2005 and is represented in this year’s Wynne. She also won the Portia Geach Memorial Award for portraiture in 1992 and 1994. Her work is represented in numerous public and private collections including the Art Gallery of New South Wales and the National Portrait Gallery, Canberra.

This work is now in the collection of the National Portrait Gallery, Canberra.