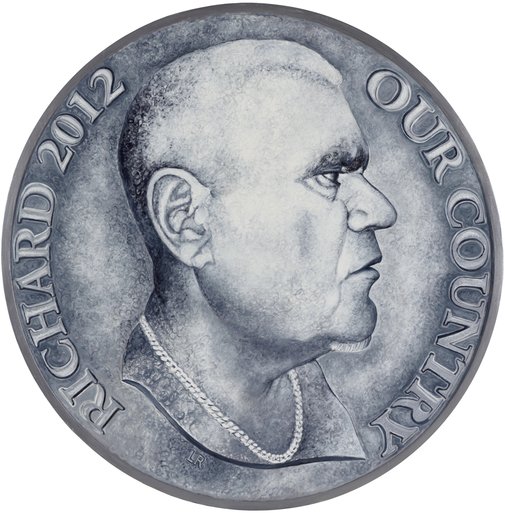 ‘Richard grew up in a tin shanty with his family in an Aboriginal encampment on the outskirts of Charleville in Queensland,’ says Roberts. ‘I remember those camps in the 1950s and 60s. His rise from such humble beginnings to his status as an internationally respected artist is a triumph of intelligence and hope over ignorance and exclusion. Richard is a leader not only as an artist, but as a social activist and spokesperson for his people and for a better, fairer Australia. My painting acknowledges his achievements.’

The format of the portrait refers to the fact that Bell ‘speaks of Aboriginal currency; about the Dreamtime tourism and Aboriginal art industries and the ongoing plight of his people and other Aboriginal nations in Australia,’ says Roberts.

Born in the rural town of Alpha in Queensland in 1952, Roberts studied at the Julian Ashton Art School and the Queensland College of Art. He has a Master of Fine Arts degree from the Queensland University of Technology. He was the Australian Fellow at PS1, New York in 1996–97 and takes up the Australia Council residency at the British School at Rome April–June this year. He has been exhibiting since 1975 in solo exhibitions and numerous group shows including Australian perspecta at the Art Gallery of New South Wales in 1991 and 1995, the Australian Pacific Triennial of Contemporary Art (APT) at the Queensland Art Gallery in 1996, the 2002 Sydney Biennale and, most recently, Ten years of contemporary art: the James C Sourris AM Collection at Brisbane’s Gallery of Modern Art in 2011–12. His portrait of Mary MacKillop was a prize-winner in Mother Mary: a tribute at the Powerhouse Museum, Sydney in 1995.