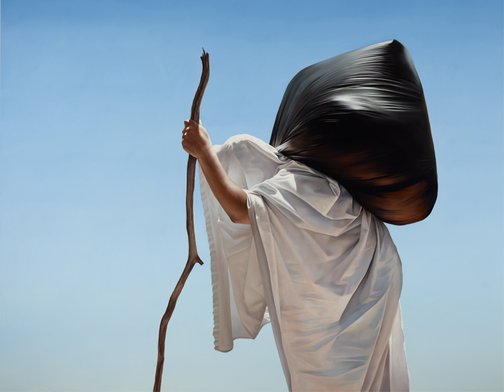 Juan Ford’s painting is a self-portrait about his journey through life. Describing the work, Ford says: ‘This journey is an odd one. A boy living in a satellite suburb, from an idealistic, bi-cultural family grows up and runs from that town as soon as possible. He studies hard at science and enrols in an engineering degree. Somewhere along the way he starts attending art school student parties, where they actually have girls in their courses. A year later he’s one of them himself. An art student, I mean. The journey isn’t that odd.

‘Nothing can prepare him for the rollercoaster ride that ensues, initially knowing nothing about art, to learning a little, to rebelling against it, to embracing it. The cycle repeats, to the present day.

‘This year he realises it’s been over 10 years that he’s been living from art, with its many scary, precarious moments. So it’s time to make a painting about it all. What he looks like is beside the point, there’s no need to represent that. That wouldn’t explain anything. But the lonesome pilgrim, going who knows where, keeps coming to mind. It’s a funny image, simultaneously serious and absurd. Like himself.’

‘Everyone is a pilgrim of sorts, and this pilgrim is me.’

Born in 1973, Ford lives and works in Melbourne. In 2001, he received a Master of Art, by research, from RMIT University. He has had over 20 solo exhibitions since 1998, at institutional, public and commercial galleries and artist-run spaces. He has shown work in many group and survey exhibitions, nationwide and internationally. He won the Fisher’s Ghost Art Award in 2006 and the 2004 Fletcher Jones Art Award. He was also named the People’s Choice at the 2010 Basil Sellers Art Prize, the 2004 ABN AMRO Emerging Artists Prize and the 2004 Salon des Refusés. He has also been awarded international residencies. In 2010 he was commissioned to create an exhibition for the National Gallery of Victoria’s children’s program and he has been commissioned to create work in 2012 for Hotel de Immigrantes, a project in Manifesta 9, the European Biennale. He has painted several commissioned portraits and is currently completing a portrait of The Hon John Brumby, former Premier of Victoria, for the Victorian State Parliament.