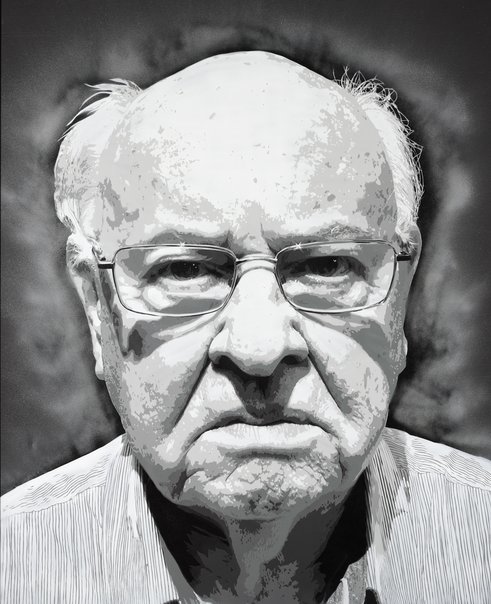 Father Bob Maguire is a colourful, outspoken Catholic priest from South Melbourne. Controversially forced to retire in 2012, he runs the Fr Bob Maguire Foundation, which provides practical help to areas of the community most in need. Also a media personality, he is currently the co-host of Sunday night Saffran on Triple J with John Saffran. He was awarded an Order of Australia in 1989, a Centenary Medal in 2003 and was named Victorian of the Year in 2011.

‘Bob has always reminded me very much of my grandfather who passed away 10 years ago, so I’ve always had a soft spot for him,’ says Luke Cornish. ‘I had the idea to paint his portrait a few years ago, but the opportunity didn’t arise until recently when I had a chance meeting with him at a gallery opening in Melbourne.

‘I think the most important factor in art should be honesty, so my representation of Bob is as honest as possible to how I see him: cranky.

‘The portrait is stencil art, made using spray paint and around 30 hand-cut stencils. Although it has its roots in street art, the technique itself has evolved to an almost hyper-real level. I deliberately chose greyscale (an image composed exclusively of shades of grey; in this case nine shades) to set the mood of the piece. I met Bob at a low point in his life, being forced into retirement and after the loss of a close friend. I wanted to capture the sombreness he was feeling. What I like about Bob is that there is no bullshit; what you see is what you get. It was very important for me to capture that in the piece. The process of making of the image, from inception to completion, and the interaction with Bob was covered in a short film called Me–We.’

Born in Canberra in 1979, Cornish, also known as ELK, is the first street artist to become an Archibald finalist. A self-taught stencil artist, he now shows with Metro Gallery in Melbourne. He won the Australian Stencil Art Award in 2010 and was a finalist in the Metro Award in 2011. The short film Me–We in which he featured, directed by Jacob Oberman, was short-listed for this year’s Tropfest.