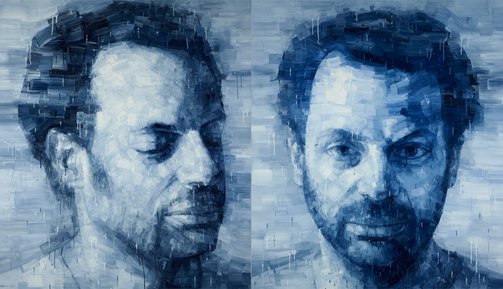 Their other films include the Golden Globe®-nominated Shame as well as Oranges and sunshine, Candy and Disgrace. Sherman is also a director of the not-for-profit animal protection institute Voiceless, which aims to raise awareness about the suffering in factory farms and the commercial kangaroo industry.

‘For me as an artist, Emile seems to represent a new generation of post World War II secular Jews: outward looking and firmly engaged on the one hand; introspective and gentle on the other. I have tried to capture these two personas in my diptych,’ says Adam Chang.

‘I feel linked to Emile’s compassionate philosophy with regard to animals and to the world at large. I share his desire to make the world a better place.’

Chang was born in Shanghai in 1960 and is now based in Sydney. He attended Shanghai University 1989-93. Since the early 1980s, his work has been shown at major exhibitions throughout China, where his awards include the 1992 Shanghai Art Prize. Chang migrated to Australia in 1997. He has been a finalist twice in the Doug Moran National Portrait Prize, where he was highly commended by the UK international judge in 1998 and voted as a favourite portrait in 2000.

Chang is a six-time Archibald Prize finalist. He was short-listed in 2009 and won the People’s Choice last year for his portrait of author JM Coetzee. This portrait was selected to tour to regional galleries and was voted the People’s Choice at the Tarrawarra Museum of Art and the Tweed River Regional Gallery. A solo exhibition Mao, terracotta army & myself was held in 2011 at the Chinalink Gallery.