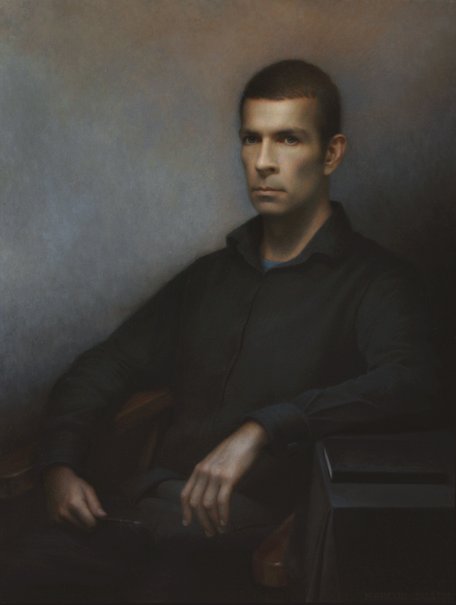 This is Marcus Callum’s second attempt at a self-portrait and is painted entirely from life. ‘Circumstance dictated that I had to settle on myself as the model, which fortunately does have its benefits,’ he says.

‘I had to use a small area of my bedroom to create this piece. It was particularly challenging as being positioned so close to the wardrobe mirrors created a number of distortions. My grip on the paintbrush is perhaps a sign of my determination to keep painting regardless of the difficulties.

‘It’s a stylised image without a lot of excess detail, and rather than a portrait executed over only one or two sittings, this is an image created over a long period. Each day’s work added another layer, in effect creating a collage of my thoughts and feelings during that time. I see a lot of my father in this self-portrait.

‘I want to paint the best painting I can – the time it takes is irrelevant,’ says Callum. ‘As it evolves, the work starts to tell you what it needs.’

Born in Scotland in 1967, Callum is based in Sydney and has a particular interest in realist portraiture, drawing inspiration from artists such as Ingres, William Bouguereau, Vermeer, Velasquez, John Singer Sargent, Rembrandt, Rubens, Holbein, Waterhouse, Lord Leighton and Annigoni. He studied at the Julian Ashton Art School in Sydney after winning the Sir William Dobell Scholarship. Since focusing on painting and drawing full-time, he has been recognised with several art prizes. Callum was a finalist in the 2011 Archibald Prize with his Portrait of a seated woman, a portrait of his wife Vanessa. In 2010, he was a finalist in the Shirley Hannan National Portrait Prize, the Doug Moran National Portrait Prize and the Alice Bale Travelling Scholarship Prize.