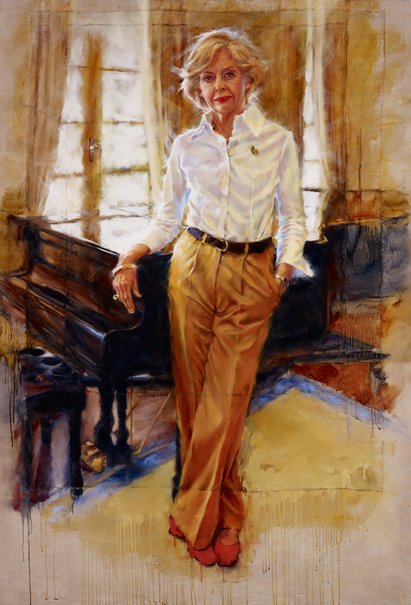 Barbara Tyson’s portrait of Quentin Bryce, the first female Governor-General of Australia, uses three layers of raw linen to metaphorically capture the essence of the growing refinement of a strong, elegant, organised and graceful leader.

The base layer is free, messy and naturally flows to portray the earthiness of a grounded woman’s early years in Ilfracombe, regional Queensland.

‘I first met Her Excellency early in her legal career, when, advocating for women’s rights, she engaged me to design a poster for the National Women’s Advisory Council. As a young graphic artist, I painstakingly designed the Letraset words to fit perfectly across the poster. After much scrutiny, the final product was distributed throughout Australia. Weeks later, a keen observer informed us of a spelling mistake. As a result, I sat up all night pasting hundreds of ‘N’s over the 6-inch-high word, “WOMEM”!’ recalls Tyson.

‘Ever since my ironic Freudian faux pas, Quentin Bryce has been a constant reminder to strive for excellence and be a bold WOMAN.

‘The second, more refined layer is symbolic of Quentin juggling a high profile career with her role as wife and mother of five,’ says Tyson. ‘I chose to portray her stability and strength of character with a touch of humanity by the juxtaposition of her in casual attire beside the solid grand piano.

‘The final top tier painted on location, portrays the polished woman we all know and admire today,’ says Tyson. ‘For four days I returned to capture those qualities. Having always painted with music for inspiration, it was serendipitous that with my first stroke, the sound of Debussy’s Clair de Lune filled the drawing room.’