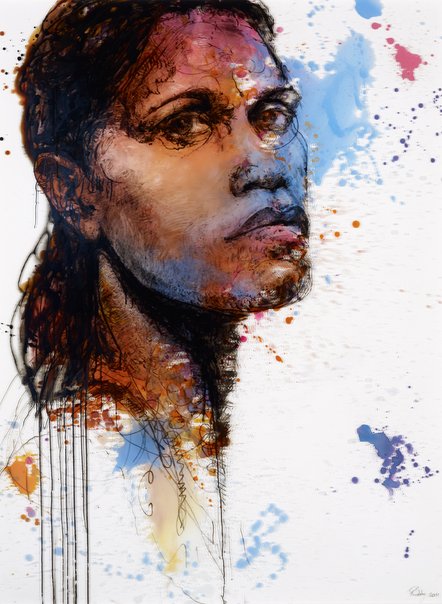 Recently named as one of the most influential women in the world, Cathy Freeman is an inspiration to all. Through her dedication in sport and her commitment to further reconciliation she has provided strength and hope in uniting all Australians.

Carrying both the Australian and Aboriginal flags during her victory lap at the 1994 Commonwealth Games demonstrated her love and pride of her heritage. Since then she has continued to pour her energy into helping others through the Cathy Freeman Foundation.

During her athletic career she accomplished so many great achievements, winning gold at the 2000 Sydney Olympics, which is regarded by many as the greatest sporting event of our generation, and in 1998 was named Australian of the Year.

Craig Ruddy’s work is created using expressive splashes of acrylic across the back of toughened glass and archival inks on the surface. The glass is suspended above the canvas, allowing light to move through it.

‘I have admired her for such a long time and to meet her was a real honour,’ says Ruddy. ‘She has such a humble and down-to-earth charm. I really wanted to capture this along with her strength, determination and free-spirited nature.’