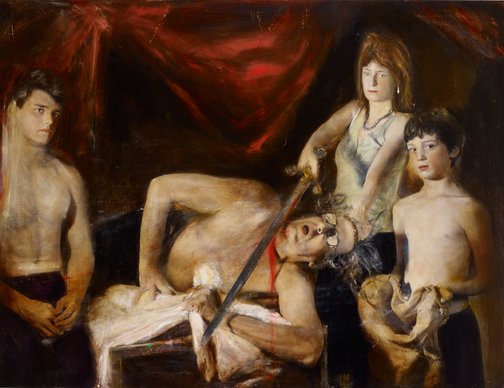 This is a portrait of Rodney Pople being beheaded by his wife Felicity Fenner, as their two sons look on. The composition borrows unashamedly from Caravaggio’s Judith beheading Holofernes (1598). It has been remodelled here by Pople to create an equivocal family dynamic which accommodates four rather than the original three figures.

The narrative in Artist and family is deliberately ambiguous. The victim is an artist and his female assassin a curator of contemporary art. He seems horrified at his fate, yet his crime or misdemeanour is not possible to ascertain. In modelling for the painting the curator-assassin is a willing participant in its production. The children are also complicit in the slaughter, though their attention is elsewhere. Raised in a screen culture saturated with violent imagery, they are desensitised to the bloodshed afoot.

While Pople has chosen this particular painting by Caravaggio for its theatrical effect, the biblical references are not entirely coincidental. His work came under attack last year from church groups, with protests culminating in group-prayer vigils, including outside the artist and his family’s home. Primarily, however, the work continues a lineage in Pople’s previous depictions of himself, friends and family based on well-known paintings from art history.

The Caravaggio painting was also chosen for it technical approach. For Pople, Caravaggio’s use of image projection has resonance centuries later in his own incorporation of current photographic techniques in the painting process.