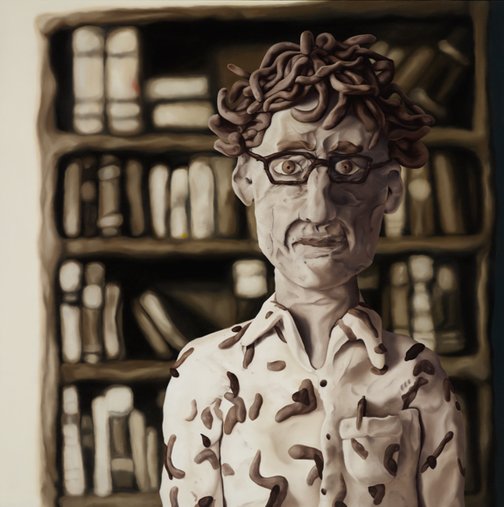 David Astle creates cryptic crosswords for The Age and The Sydney Morning Herald under the moniker DA, for which he has a large following. Geoffrey Rush has called him ‘the Sergeant Pepper of cryptic crosswords’.

The self-confessed ‘full-time word nerd’ also has a newspaper column in Spectrum called Wordplay and writes fiction, non-fiction and plays. His first novel, Marzipan plan, was shortlisted for the 1986 Miles Franklin Award and, in 2001, he won the James Joyce Suspended Sentence Award for short fiction. Astle teaches journalism at RMIT University and last year became a host on the SBS quiz show Letters and Numbers.

‘For the last 10 or so years I’ve spent at least one day a week with DA or an entire weekend if he was very hard,’ says Amanda Marburg.

‘My portrait of him is a study of a man locked in his own mind, obsessed with the way words and letters work and interplay. It was rendered initially in plasticine. Adjusting and playing with the plasticine model before painting it is akin to him pushing his mind and coming up with the nuances and subtle shifts that make cryptic crosswords work.

‘The painting consists of DA in the foreground and a case of knowledge in the background, gridded up and ordered as a crossword is.’