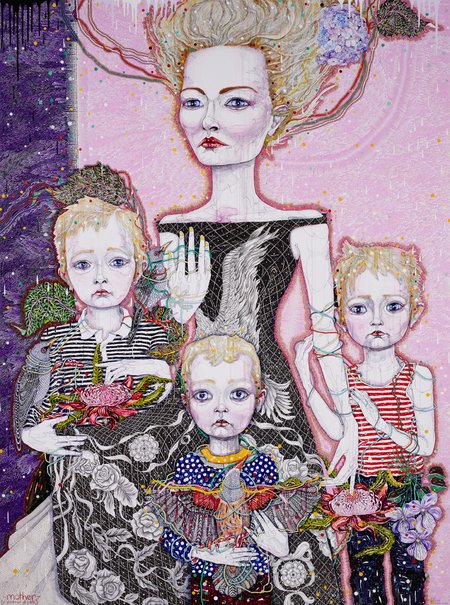 Del Kathryn Barton won the Archibald Prize in 2008 with a self-portrait that depicted her with her son and daughter. This year her subject is actor Cate Blanchett, who is co-artistic director of Sydney Theatre Company with her husband Andrew Upton. She and Upton have three sons.

‘For a number of years now I have been dreaming up paintings of Cate (I am one of her biggest fans),’ says Barton. ‘When the opportunity unexpectedly arose, I met with her to discuss the portrait. After understanding that Cate’s preference, for a number of meaningful reasons, was to be painted with her beautiful boys, and being very passionate myself about imagery of motherhood, I threw myself into the process of this challenging project.

‘It was my hope to create a picture that encompassed a varied personalised symbology. After grilling Cate, I included a hydrangea (one of her favourite “nanna” flowers), a few starlings (after an epiphany she had in the presence of a murmuration of starlings), an extraordinary Alexander McQueen gown and, of course, Dash, Roman and Iggy. The waratahs I included to symbolise a sense of place and origin and because I have always thought that they looked like crazy little UFOs hovering in the bush, pertaining to Cate’s ethereal and otherworldly beauty.

‘I have configured the boys (in relation to Cate) in an attempt to describe both the depth of their coexistence and individual wholeness. Filaments of ribbons gently weave the figures together within some kind of resonance. There is the utterly profound synergy and interconnection that a mother and her children have on one level; and on another, four autonomous energies and lives.’