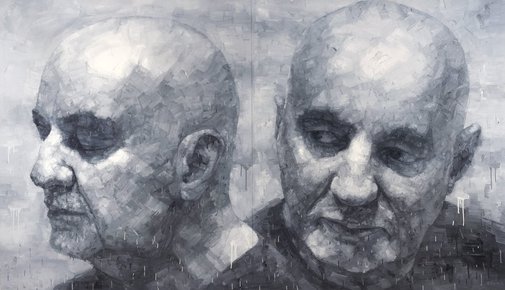 Simeon Kronenberg is a gallery director, curator, writer and arts administrator. He was the founding director of Anna Schwartz in Sydney where he currently works. Previously he was associate director and then director of Sherman Galleries and, before that, he worked as national director of Museums Australia, the peak national association representing Australia’s museums and galleries.

Adam Chang met Kronenberg through his brother David. ‘In darkness and in stillness (the closing of the eyes) we arrive at an understanding and an awareness of the visual world around us,’ says Chang. ‘In my painting of Simeon, I have attempted to express the contrasting aspects of the human face and mind.

‘Simeon’s passion for contemporary and installation art contrasts with my expressionistic approach to his portrait. I have stripped away any distractions, such as colour or intricate detail, to emphasise structure and intensify the psychological impact.’

Chang (Hong Jun Zhang) was born in Shanghai in 1960 and educated at the college of fine arts, Shanghai University. He began exhibiting in the early 1980s and had his first solo exhibition in 1985. He was subsequently represented at major national exhibitions throughout China. In 1989, he was selected to join the Art Association of Shanghai: the youngest member in the history of the organisation. He migrated to Australia in 1997. In 2001, he was one of 24 artists in the national touring portrait exhibition An Australian odyssey. He has twice been a finalist in the Doug Moran National Portrait Prize. This is the fourth time he has been represented in the Archibald Prize.